OK, a lot has happened in the last few weeks since we released our single but the last week has been a bit crazy so here’s what’s happened.

So I would like to advise any bands or musicians if you have any music that you think is pretty good, whatever style, wait until you think it’s great, then submit it to Fresh on the Net (do your homework first and read the info on the website) and they will listen to the track. They get about 150 tracks every week! But yours will stand out if it’s really good.
I think it’s so good that I have started voting there too and I’m amazed at the amount of great music being produced.
Share
on 27 August 20137 August 2020 by Brynovsky

Our First Single Out Now

Our first single has just been released for digital download. City of Lights is a stompy one with Leroy singing lead vocal and a big dub ending – we’re thinking about putting it at the front of the album. Put the Baby Down to Sleep is more of a straight reggae track with Idana on lead vocal.

You can download this double A-side from most online stores, hear it on Spotify etc but watch out for iTunes, they have got the pricing completely wrong for the bundle. I hope they’re gonna fix it soon.

Mini-tour with the Congos 2011

On May 17th 2011, the Brynovsky dub band were billed to support Yellowman at O2 ABC in Glasgow. When we got to the venue we were pleased to meet up with a couple of The Rasites who we’d met when we supported the Abyssinians earlier in the year. Two of them were in Yellowman’s band and it was great to catch up. So we set up the shared backline and got our soundcheck done after the Rasites were finished.

The gig went really well that night and we had a very positive response. Yellowman came on and had the crowd rocking all through his set. He’s a great entertainer and got the whole crowd on his side. What a group of classic tunes too!

The following afternoon we were loading our gear into The Venue in Dumfries, our first gig in the town and the first legendary reggae band to come to Dumfries so far as I know. Yea, I’m talking about The Congos of course! The band were very late and were soundchecking well after the doors were due to open. We were helping out on the tour and providing some backline. Everything was back to front as we had soundchecked the backline before The Congos arrived. John Dinning, our soundman was hired for The Congos too and had a tricky job getting everything balanced in a crazy last minute scenario.

We played well and had some good support from our local crowd. When The Congos came to the stage, I don’t think Dumfries knew what had hit. The band were even better than I remembered from 2008 at the Ferry in Glasgow. At the end, people were hugging the promoter for bringing such a band to Dumfries. For a review try http://adelastockton.blogspot.co.uk/2011/05/congos-in-dumfries.html and there’s a video at http://thecommonty.blogspot.co.uk/2011/05/congos-open-up-gate.html

The next day we all drove to Dundee and got things moving at The Reading Rooms, a good venue. This was great for us as it was a very fresh, new audience and the minute we got going it was clear that they wanted to hear more reggae. We played our best gig to date and the crowd just wanted more. A breakthrough for Brynovsky no doubt – everything came together and we rocked the place. By the time the Congos set was over, this part of Dundee was a happy place. Can’t wait to return. Check these videos http://www.youtube.com/brynovsky.

The band took a couple of days off and drove back to Galloway. John the soundman, me and Anders went on to the African Carribean Centre in Osborne Street, Glasgow the next morning. I was looking after the stage and Anders was DJing with Samson Sounds. By 10.30 the whole place was rammed for a sweaty performance. Zero stage, zero ceiling height, zero dancing space but a fantastic atmosphere. The Congos just get better and better!

During the aftermath of the gig the promoter was frantically on the phone. Visa problems, the band had to leave the country… what about the Newcastle the following night? 5am that morning The Congos fly to Berlin, then fly straight back to Liverpool. Then they take a cab to Newcastle. How crazy is that? I’m on a pretty empty tour bus with no band apart from Leroy “Jah Dave” Jones, their percussionist who is a UK resident. We had a chilled journey to Newcastle. Leroy, and some of The Congos crew listen through the Hard Curves album a few times and some song demos. He is a great singer and he said he wanted us to work together so we had something new started there and then.

Soon we get to Newcastle and I have a rush job on getting the backline shipshape before the band arrive. The Congos eventually get on stage at 1.30am. They must be knackered! Ashanti Roy is not on stage with them but the remaining three (Cedric, Watty and Tallash) get on and do the job.

Everyone piles onto the bus after the gig and thankfully it’s a sleeper. We set off about 3.30am and most have crashed out by 5.30. When I wake it’s 11am, banging my head on the low ceiling of the bunk. I get dressed and crawl downstairs, get a coffee and get deep into a chat with Little D (the Congos guitarist) about computers and soundcards. Then out comes a ukulele and melodica for a jam.

We pull up at a travelodge in Wembley and I’m waiting for a guy to pick up the backline and take it to Dingwalls. A dread in a White Mercedes van pulls up – it must be them – hang on, it’s Dave, Yellowmans bass player – eh? I go to investigate – Yellowman and his crew are standing in the foyer of the Travelodge – they are playing in London tonight too. I say hello again to those guys and eventually another white Merc pulls up – it’s some of Jah Youth’s crew and we’re off to Dingwalls.

I meet up with the Brynovsky band and John outside the classic venue in Camden. It’s heaving with the Sunday market and there’s a good vibe in the air. By the time we soundcheck, they’ve already opened the doors. We played a good set and managed to get a multitrack recording of it. There’s a clip here http://www.youtube.com/watch?v=zi87cXXpCQ8. After, Earl 16 came on to do a PA set and gave us a massive big up before he gets going – thanks Earl! The Congos play another amazing set and it’s all over. I have seen quite a few reggae bands and they are one of the best – it was an unforgettable experience. After a hasty retreat from the venue, we drive John to Stanstead and he flies back to Glasgow for some other gig he has on. We drive the band out to my hometown in Essex and catch up with some old friends and we all stay up too late and whatnot.

Monday morning we got up and drive back up the M6. We won’t forget gigging and making friends with The Congos. Lovely people and a great band. Long may they continue. Here’s a big belated thank you to Cedric, Watty, Ashanti, Tallash, Winston, David “Little D”, Bubbler, Errol, Leroy, Miss Williams, Shaka, Adrian, The Rasites, Earl16, Jah Youth, Craig, Tilly for the floor and the people at Dingwalls who fed us excellent West Indian food. Thanks to the Brynovsky band and John Dinning too for all the hard work.
Tim 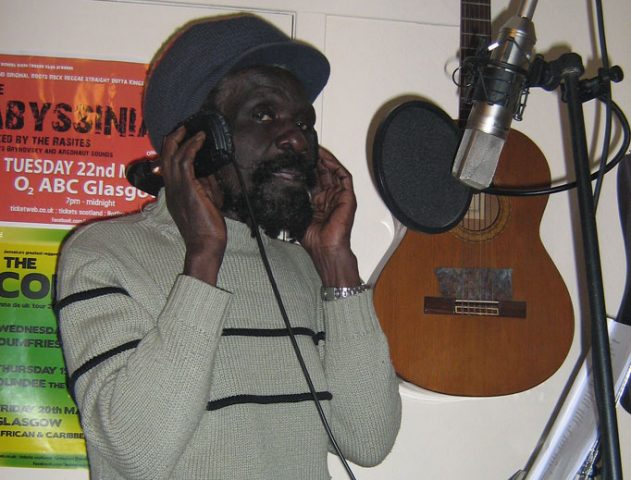 They’re going to play our demo track “Baby” on the reggae show at Sunny Govan radio tonight, sometime between 9 and 11pm. That track seems to be attracting some attention and I wasn’t originally going to put it on the demo at all. I was persuaded that it was a goer by a female friend. Maybe it’s a male/female thing.

In fact I was stuck writing this song for several years until I played the opening line to Leroy Jones aka Jah Dave. He loved it and gave me a few lines for the lyric that helped me get the song finished. Leroy is a great singer in his own right and also plays percussion for The Congos.

You can hear it on 103.5FM in the Glasgow area or online at sunny govan radio between 9 and 11pm.

Rain on my window…

I’ve had my head down in the studio over the winter and will have some music to show for it quite soon. There are no gigs planned yet though and the new tracks are all songs so it will be different.

I hope to have an album finished by later in the year but also to release a few tracks quite soon.

Anyone hoping for more of the same could be disappointed but if you were intrigued by the instrumentals and just wished there was a singer, you might just be in for a treat!

Any last minute festival goers might like to know that we’re playing in the Furry Chillum tent at Eden Festival, Moffat this Sunday at 6.30pm. Gonna be a blast!

The tour went really well. It was a privilege to meet and play with such great people. I’ll post a full tour report here soon.

We’re supporting Yellowman and The Congos in May 2011. Full list of dates.